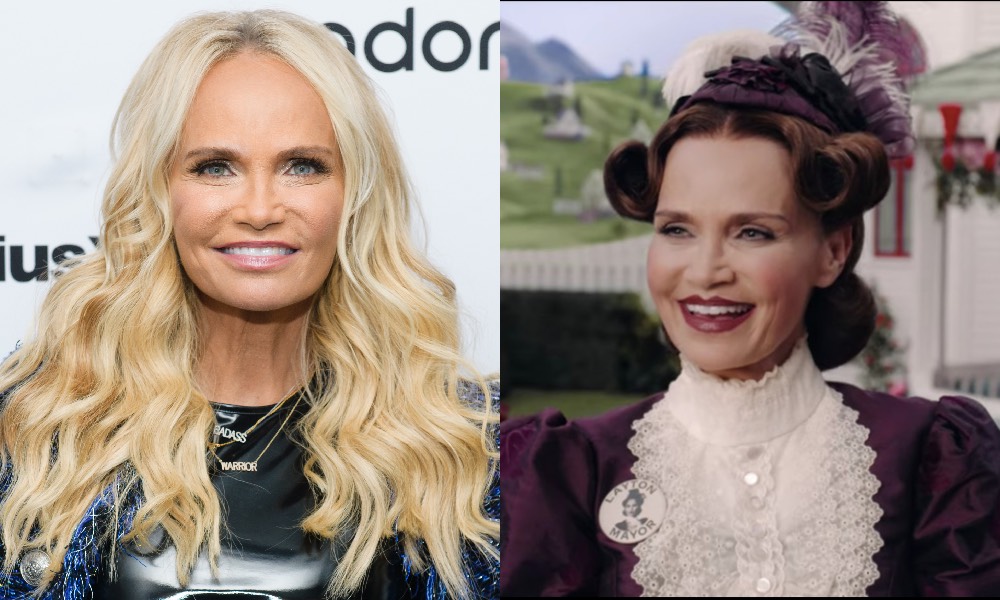 Bonafide gay icon Kristin Chenoweth wants LGBT+ people to know that God made them exactly as they are.

The legend of stage and screen is a Christian who holds her faith close, but she is deeply aware of the harm religion has caused to her queer fans.

This is one of the reasons she was so keen to play Mildred, a staunchly conservative homophobe, in Apple TV’s new musical comedy series Schmigadoon!

The series follows Josh (Keegan Michael-Key) and Melissa (Cecily Strong) as they accidentally get trapped in a Golden Age musical while trying to fix their crumbling relationship.

In Schmigadoon!, Kristin Chenoweth’s character leads a group called “Mothers Against the Future”. She uses her social capital in her small, 1940s American town to push back against social change, whether that’s couples having sex out of marriage or LGBT+ people living openly and honestly.

Chenoweth drew on her own experience of growing up in Oklahoma, where religion ruled and social change felt like a distant dream, in fleshing out her character in Schmigadoon!.

“I’ve lived it,” Chenoweth tells PinkNews when asked about Mildred’s conservative views. “I am a Christian, I also am an LGBTQIA [ally]. To me, my message – not just in musical theatre or film or whatever – is that God made us all how he made us, and he loves us.”

“I have been on the other side of my own people judging me, and it was very easy for me to draw on that for Mildred. Before there was cancel culture, I did a Christian record and was also on The West Wing, and I played a lesbian in a movie with Anette Bening, and none of that goes together.

“First of all, I’m an artist, but secondly, as long as I’m on this planet, my message will be that God loves us because he made us in his image. That doesn’t mean we’re perfect, that doesn’t mean there’s not bad people in the world.”

She adds: “I don’t want to be judged for not accepting people for where they are, who they are, in their life.”

Kristin Chenoweth was proud to play an ‘unlikeable character’ in Schmigadoon!

In playing Mildred, Kristin Chenoweth was determined to explore the psyche of a character that rails against progression and change. Doing so wasn’t exactly a tall order for the actor, who has been targeted by real-life conservative groups in the past that bear an uncanny resemblance to “Mothers Against the Future”.

“Mildred is scared, she’s fear-based, and she’s a little maniacal. ‘Mothers Against the Future’, I had a group come out against me here in the States when all of this was going on – it’s called One Million Moms. I just thought it was just so apropos they were attacking me when I’m them. So I’ve lived it. I know Mildreds of the world, and I’m glad I got to play such an unlikeable character, because in the six episodes, you do see a little growth, and it doesn’t happen till the end, but at least it’s there. That’s why I love this show.”

It was deeply important to Kristin Chenoweth that Mildred adapt by the time Schmigadoon! comes to a close. In fact, she says she wouldn’t have accepted the role if the character remained set in her ways.

“Not to put a pretty bow on it, but I needed the audience to see that maybe we can all look at ourselves and say, ‘I see a little bit of me in her,’ or ‘I see a little bit of me in him,’ and maybe I like that, or maybe I don’t like that. That’s one of the most fun things about playing the bad guy, the dark cloud, is first of all, I had to find ways to love her or I couldn’t have played her. She’s angry and she’s upset and she’s been hurt.” 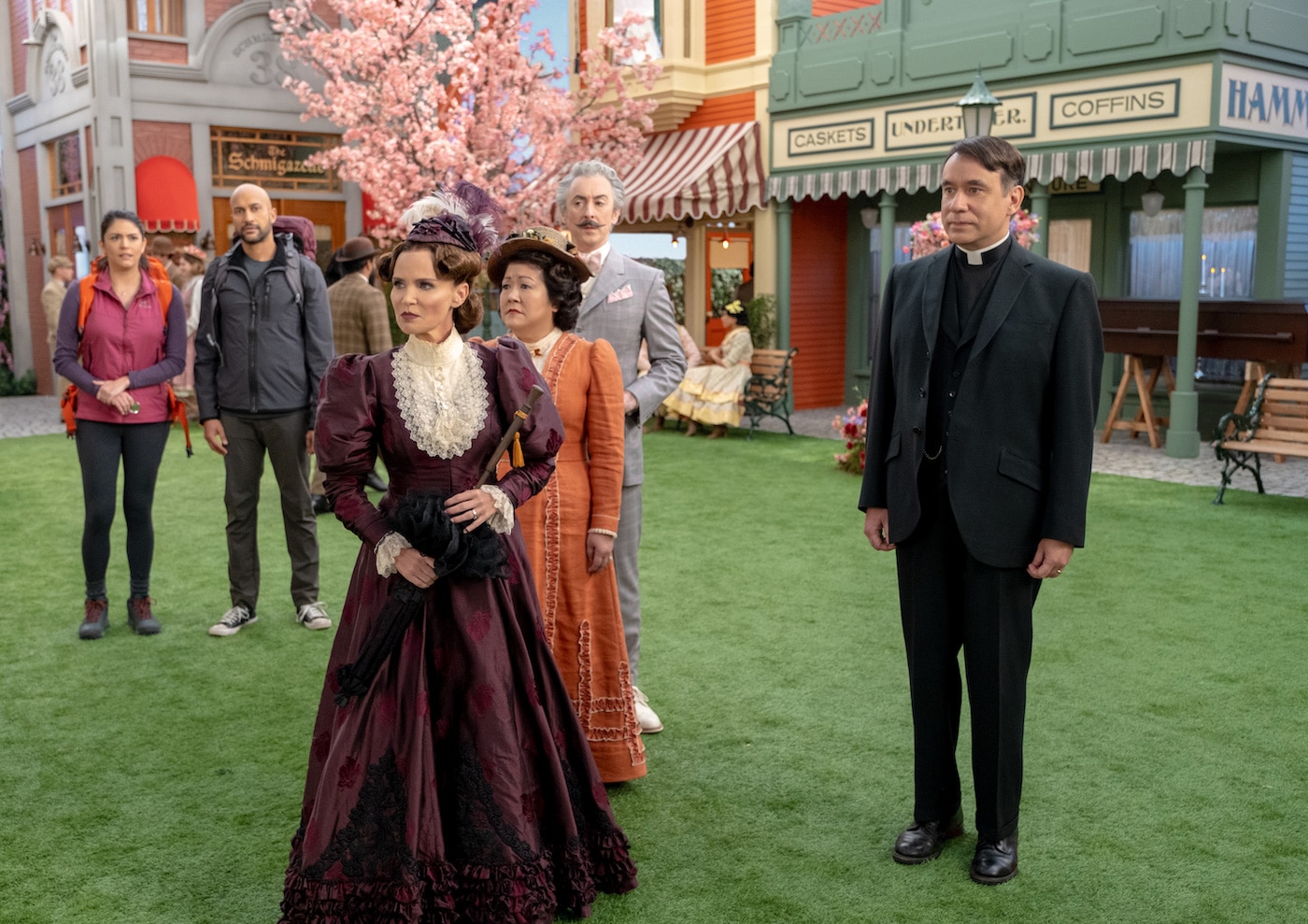 “Along the way she got bumped and bruised and she’s taking it out on the world,” Chenoweth says. “And she’s the one that has to put her head on the pillow at night, and that can’t be a fun place to live. But also there’s comedy in that – I love comedy. I love the Joker lips, I love the hair, I love the too-tight corset. I wanted that corset to be tight because I wanted to be uncomfortable.”

As well as the challenge of playing such a complex character, Chenoweth was won over by the complexity of the script – director Barry Sonnenfeld, a long-time collaborator, asked her to perform an 18-page song in one take before she’d even signed on.

A legend of musical theatre herself, Chenoweth was also roped in by Schmigadoon!’s self-aware jokes and references to musicals from the 1940s, where female characters were often paper-thin, but the music was sublime. She was excited to poke fun while also paying tribute to the genre.

“I love the fact that at the centre of it are these two characters – one loves musical theatre and one hates musical theatre – and I love that musical theatre, the silliness of it, or the wackiness of it, brought them together. I love breaking into song – it makes complete sense to me, but when it’s done poorly, we should be made fun of. But when it comes directly from the heart, even in this silly world that we have, it worked. I was with my people, we were together, and we were so happy.”

COVID-19 made Kristin Chenoweth realise how ‘lucky’ she is

Shooting during the COVID-19 pandemic was a challenge, but Chenoweth was “so ready” to get back to work and to delve into musicals once more when the opportunity to star in Schmigadoon! came along.

“We were at the height of the pandemic, we were frightened, we were in an election. No matter how you voted, we were still in a very divisive time. But we stuck together, and not one of our cast got COVID. This is pre-vaccine. We wore these plastic cones, like we had been spayed or neutered. And I just thought, I would have done any of it, I would have sung about this dirty Kleenex – I was so ready to get in there and everybody else was too.”

The pandemic has also been an eye-opening experience for Kristin Chenoweth – it has forced her to re-evaluate, and made her realise just how remarkable her career has been.

“I am never going to complain again about having to get on a plane, or even two, to get to a venue to get to a concert,” Chenoweth says.

“I’m never going to complain. I’m so lucky to get to do what I love – period.” 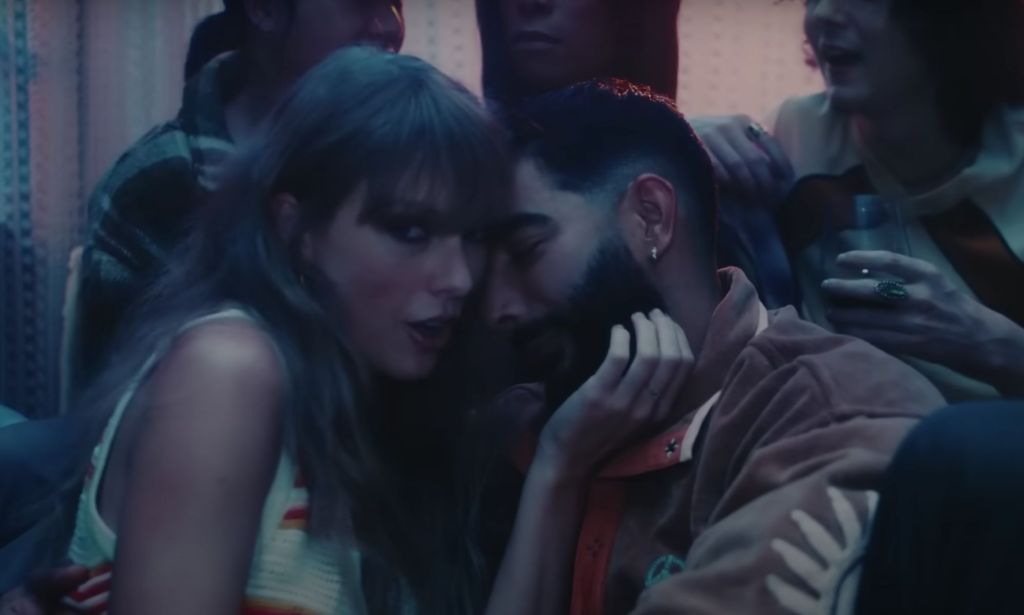 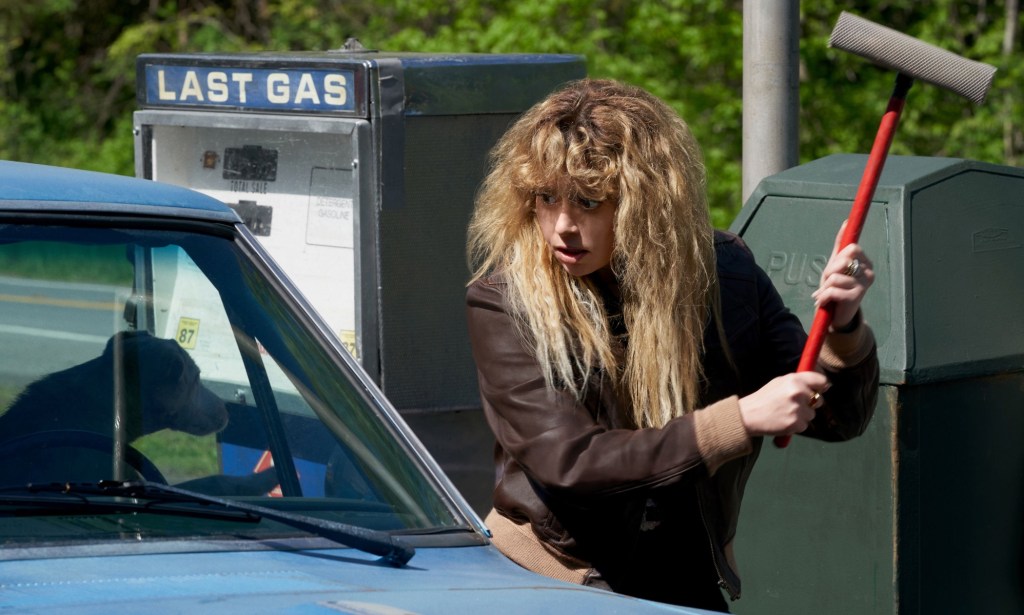 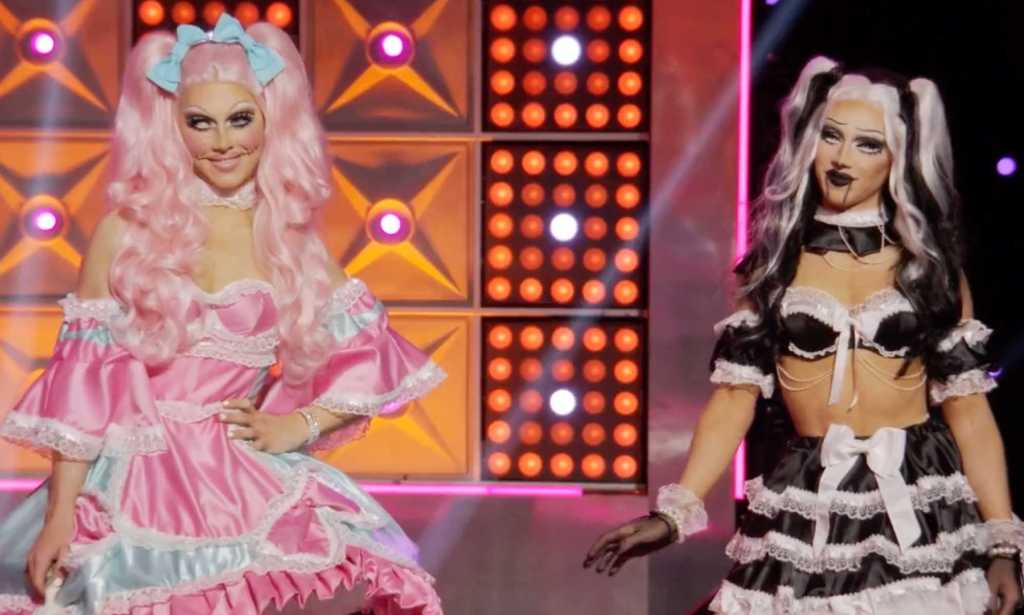 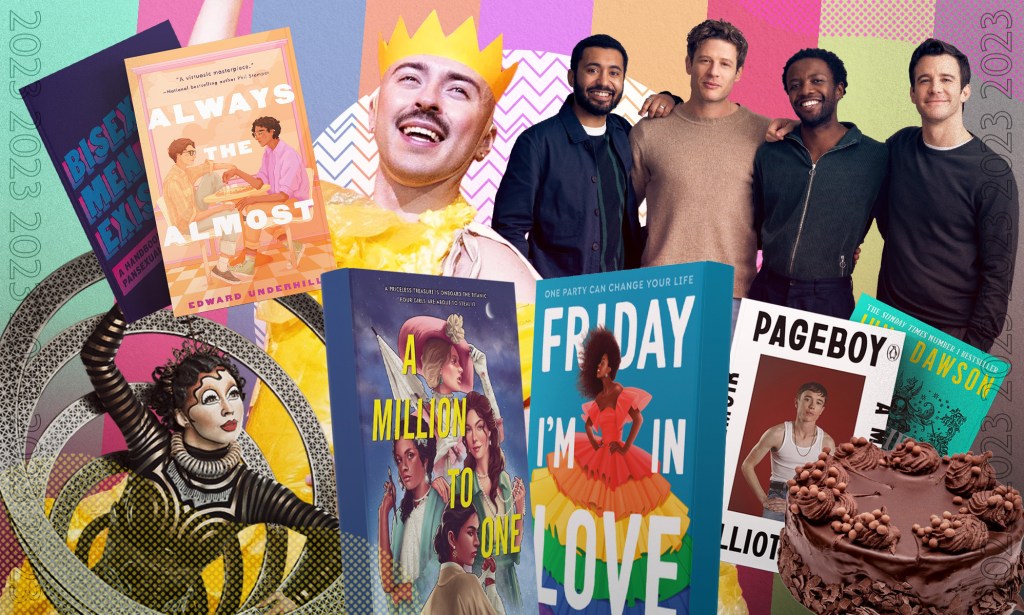 Culture
The 2023 queer agenda: Best books and plays to look forward to, from Elliot Page to A Little Life 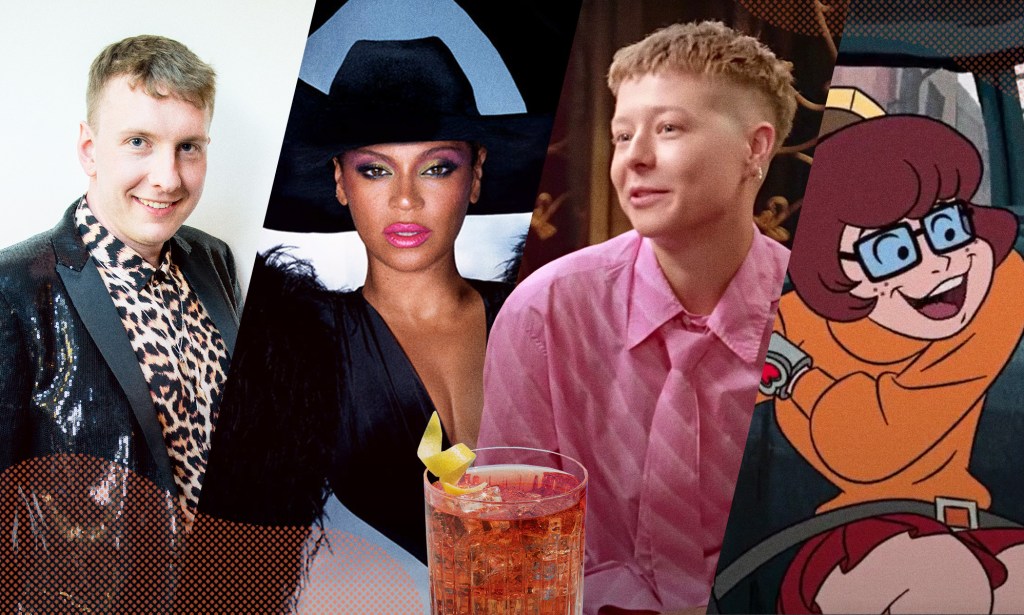