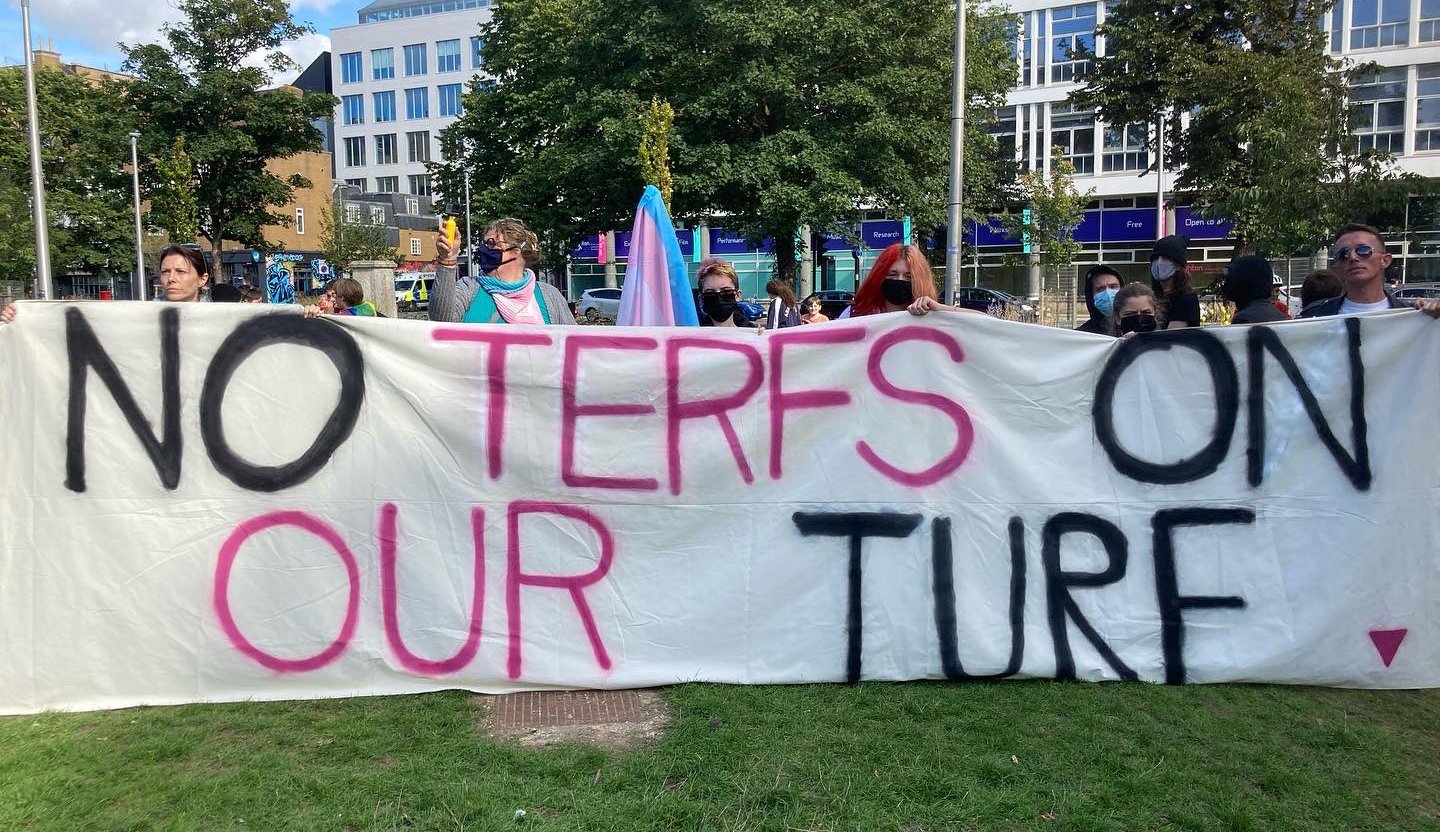 Hundreds of trans rights supporters gathered to drown out a speech by anti-trans campaigner Kellie-Jay Keen, also known as Posie Parker, in Brighton.

Parker, founder of the trans-exclusionary “Standing For Women” campaign which positions trans rights as in opposition to women’s rights, took to Victoria Gardens in Brighton for a so-called “women’s free speech” event on Sunday (18 September).

Among those in attendance were ‘gender critical’ activists Maya Forstater and Helen Joyce. The latter was seen holding a mutilated Progress Pride flag, with the chevron representing the POC, trans and intersex communities cut off.

Straight woman @HJoyceGender, posing proudly with a mutilated progress pride flag, standing over the shreds of the racial, trans and intersex justice elements which have been cut out of it, at the Brighton Kellie Jay Keen event. pic.twitter.com/fdFfjXgD8n

A counter-protest was organised by the group Reclaim Pride Brighton, which described the the event as a “transphobic hate tour” and called upon allies to “make it clear that she is not welcome here”.

An estimated 200 supporters of Keen were met with a large group of counter-protesters who carried banners reading “no TERFs [trans exclusionary radical feminists] on our turf” and “we don’t want TERFs in Brighton”.

LGBWithTheT, a group setup to counter LGB Alliance, was among counter-protesters. A spokesperson told PinkNews the opposition group totalled around 250 attendees. Throughout the day, they added, the two groups traded barbs.

“As they chanted ‘Your mum’s a TERF’ to us, we would return with our responses, such as ‘You’re not feminists’ and ‘The people united will never be defeated’.

“Thankfully, most of the hate and lies that was spewed by the hate preacher Kellie, or her followers, could not be heard due to the fantastic noise being made to drown out the hate.” 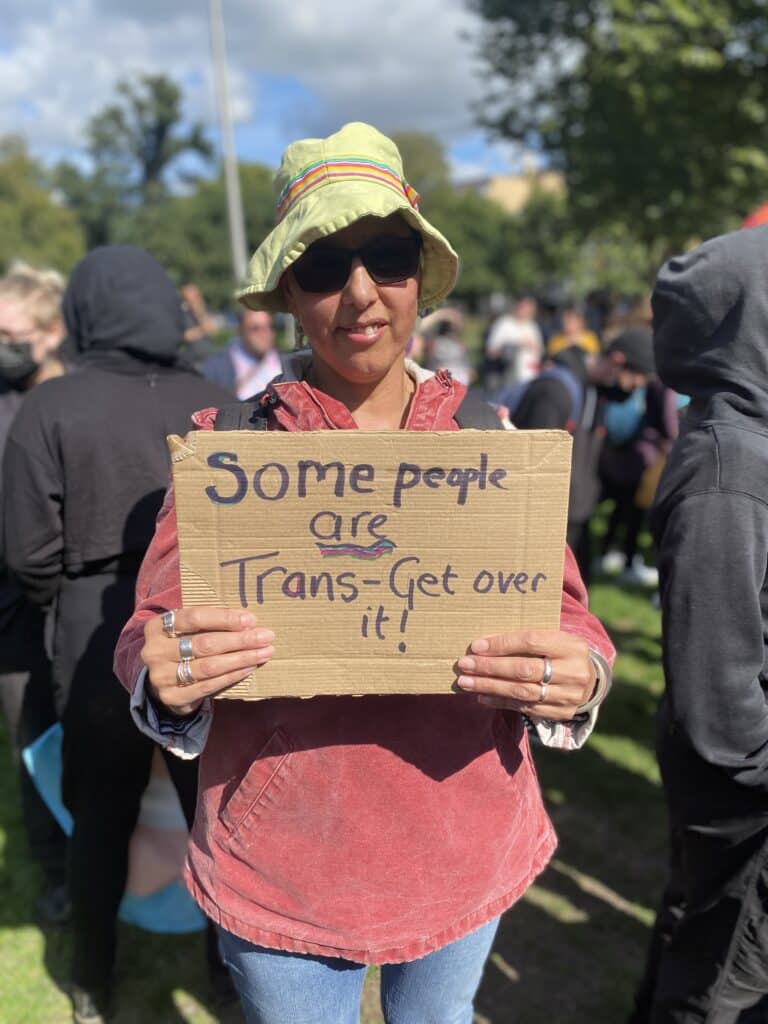 Counter protestors stood their ground until the TERFs had left. (Fox Fisher) 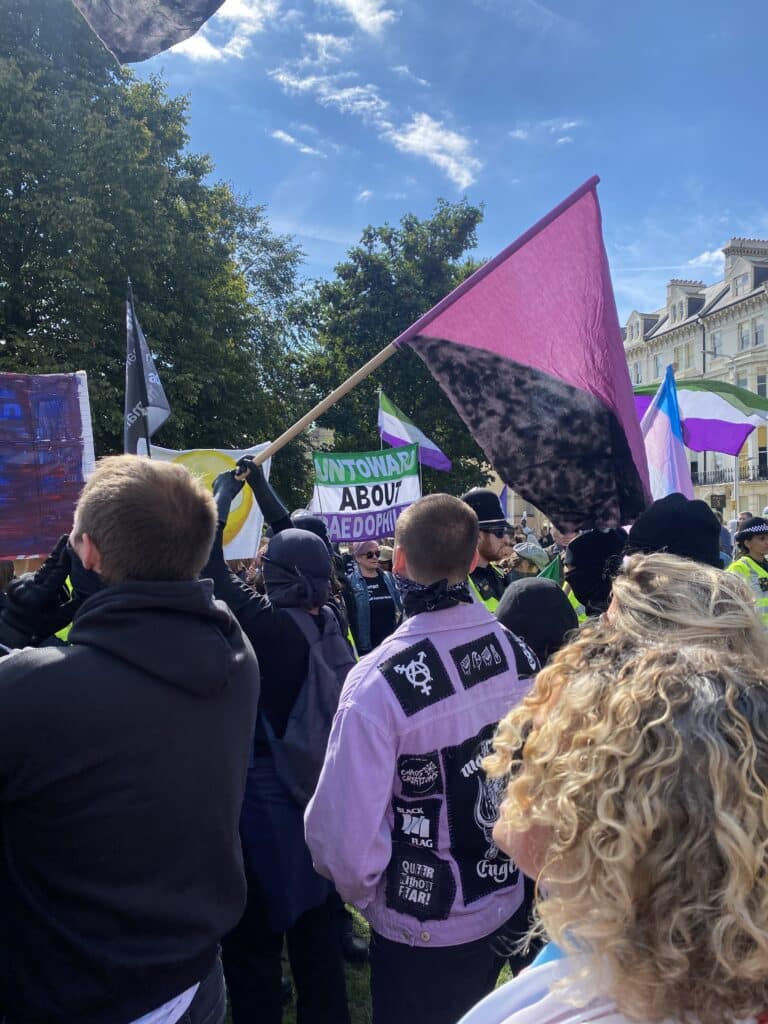 Since the event the spokesperson said the group has received “a death threat and numerous transphobic hateful tweets” on Twitter.

Police ‘formed a net’ between pro and anti-trans groups

In a video of the event posted to YouTube by Keen, she is heard saying: “Say this after me: Trans women are men. Trans men are women. There’s no such thing as non-binary and transitioning children is abuse. …

“This is why we meet we want women and men, but mostly women, we want any woman in this country to be able to freely say that she is entitled to space away from men, she’s entitled to keep our language for ourselves, we have absolutely had enough. …

“You can come with your frocks and your bad wigs, you can have your penis removed if you choose, but I’m here to tell you fellas that I never lose.”

There was a heavy police presence, with officers keeping protesters and counter-protesters separated.

This didn’t sit well with trans filmmaker Fox Fisher, who felt the police were sending a message that they were “protecting the TERFs and their right to say hateful and hurtful things”.

“Early on, one transphobe was having a direct interaction with a trans rights supporter, batting backhanded words like tennis with the police forming the net between the two opponents,” Fisher said.

Today was a demonstration of the dreaded Anti-Trans Rally in Brighton. I dreaded it b/c I knew I’d have to set eyes on transphobes in the flesh (THREAD) #LGBwiththeT pic.twitter.com/lQLen182Zt— Fox Fisher (@theFoxFisher) September 18, 2022

They added: “At the end, after four hours, many of us continued to stand our ground until every TERF left.

“I felt a sense of community, seeing the protest signs and speaking with trans supporters and felt good about standing up for what’s right, to protect and represent those who couldn’t be there.”

Sussex Police chief inspector Nick Dias said: “Our officers worked to facilitate the event and counter-protest to enable both to take place peacefully.” 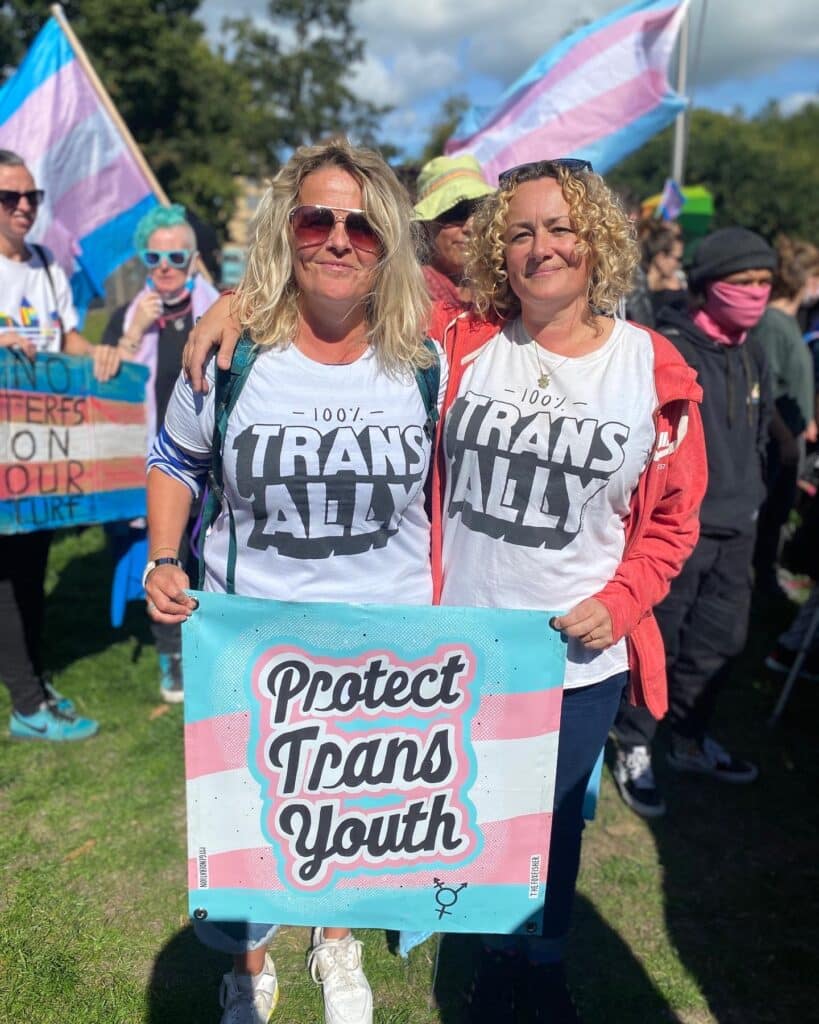 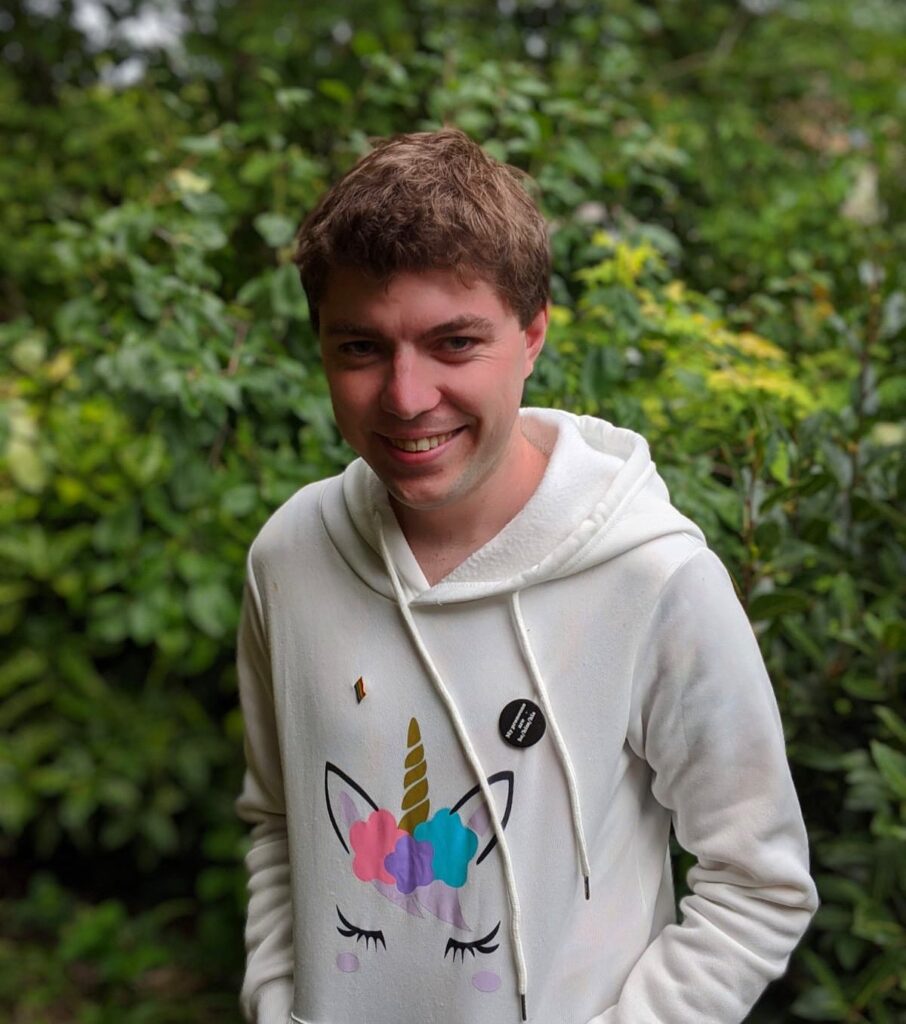 26-year-old Tom Green stands up for all marginalised people and told PinkNews he uses his “privilege to make positive changes to peoples lives”. (Tom Green)

Brighton-based Tom Green, a 26-year-old cis bisexual man, said he attended to stand up for the trans community and was surprised to witness homophobic tropes being used against other supporters.

“One of my friends was called a fetishist for wearing a skirt, and an older gay man, who was in Brighton to escape the bank holiday, was called a nonce which took him aback a little bit. He thought this kind of derogatory trope had long since died out,” Green said.

Terfs and alt right have come down to brighton! Get here if you can. Equality and human rights will always win ?️‍??️‍⚧️ pic.twitter.com/jwcc4m8emU— Lateral Hoe (@Spanish__tom) September 18, 2022

He added that the gender-critical faction is now “trying to spread propaganda online and misinterpret the days events”, with headlines linking “violent clashes” to a “trans mob”.

JK Rowling tweeted about the event, writing: “I see the Be Kind brigade are once more hiding behind their black masks, throwing smoke bombs, screaming ‘scum’ at women speaking up for their sex-based rights and howling abuse at lesbians for not doing dick.”

I see the Be Kind brigade are once more hiding behind their black masks, throwing smoke bombs, screaming 'scum' at women speaking up for their sex-based rights and howling abuse at lesbians for not doing dick. #LetWomenSpeak #LesbianStrength2022 pic.twitter.com/blGwK7Ibyc— J.K. Rowling (@jk_rowling) September 18, 2022

One person who was there to defend trans rights shared on Twitter that a smoke bomb had indeed been thrown in front of her.

The post reads: “I had a smoke bomb thrown in front of me at a protest today, and I breathed a lot of it in.

“It’s f**king painful. But not as painful as what my trans comrades go through from those who refuse accept them. I’m very proud of #Brighton for turning out today. TERFs will not win.”

Kellie-Jay Keen said there was “violence against women from self-identified trans rights activists” at the event and noted that arrests had been made.

“We often encounter very angry men when we, women, meet to speak. It’s profoundly frightening direction of travel that women simply talking can inspire such violent fury from men,” she added.

A police spokesperson told PinkNews that one woman and two men were arrested. The 19-year-old women was detained on suspicion of assault and a 20-year-old man was arrested on suspicion of obstructing a police officer – both have been released under investigation pending further enquiries.

Craig Thomas, 50, of no fixed address, was charged with assault and two counts of possession of a bladed article.

He has been released on bail and will appear before Brighton Magistrates’ Court on 13 October.

Chief inspector Nick Dias told PinkNews: “Our officers worked to facilitate the event and counter-protest to enable both to take place peacefully.” 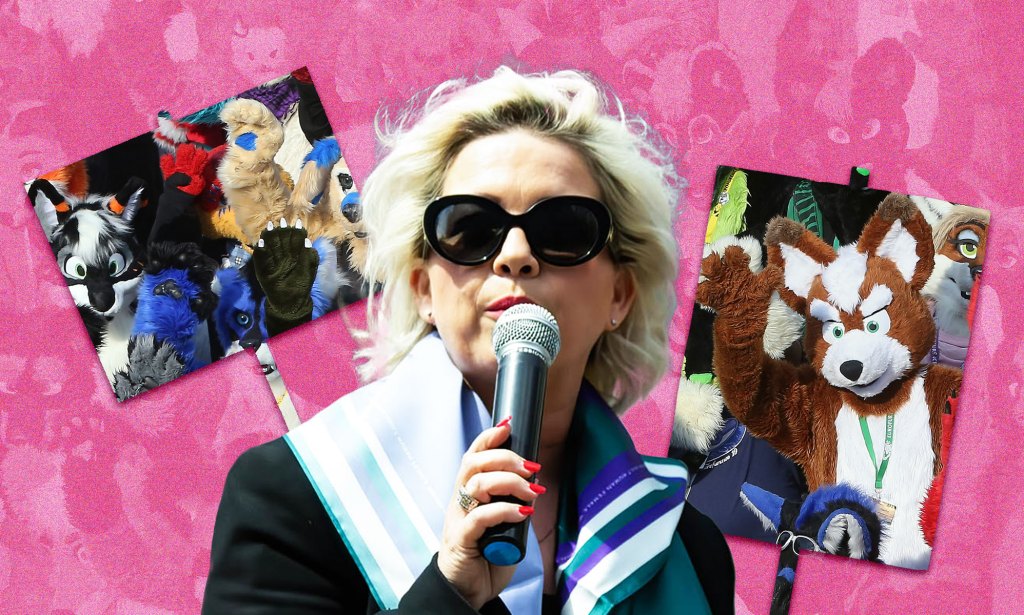 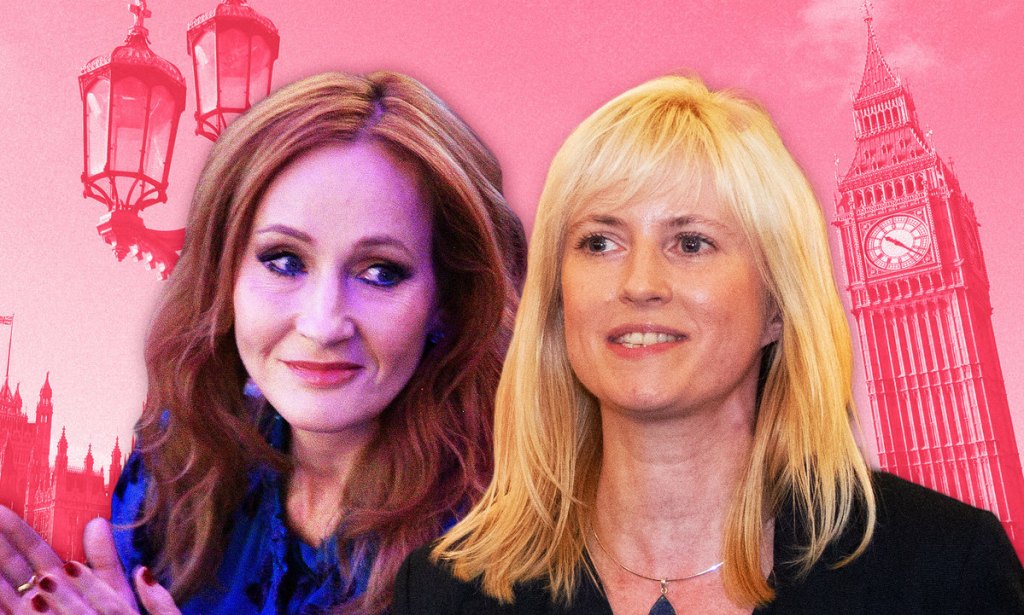 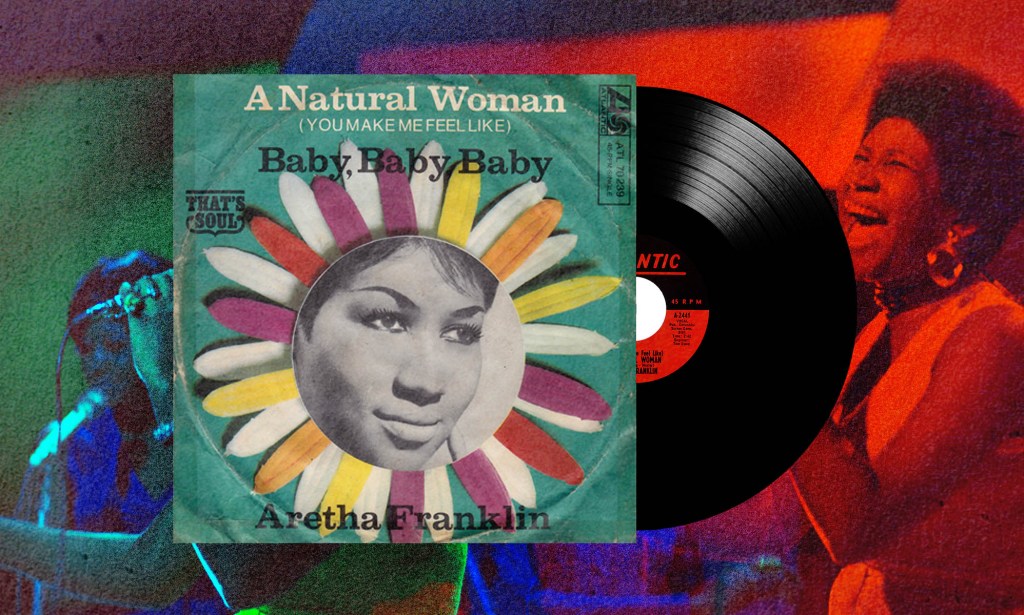 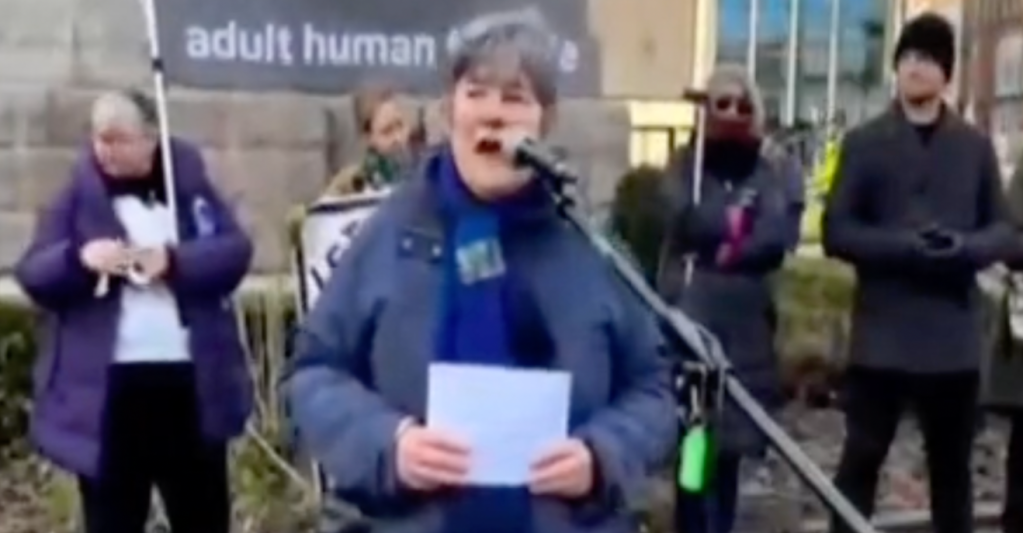 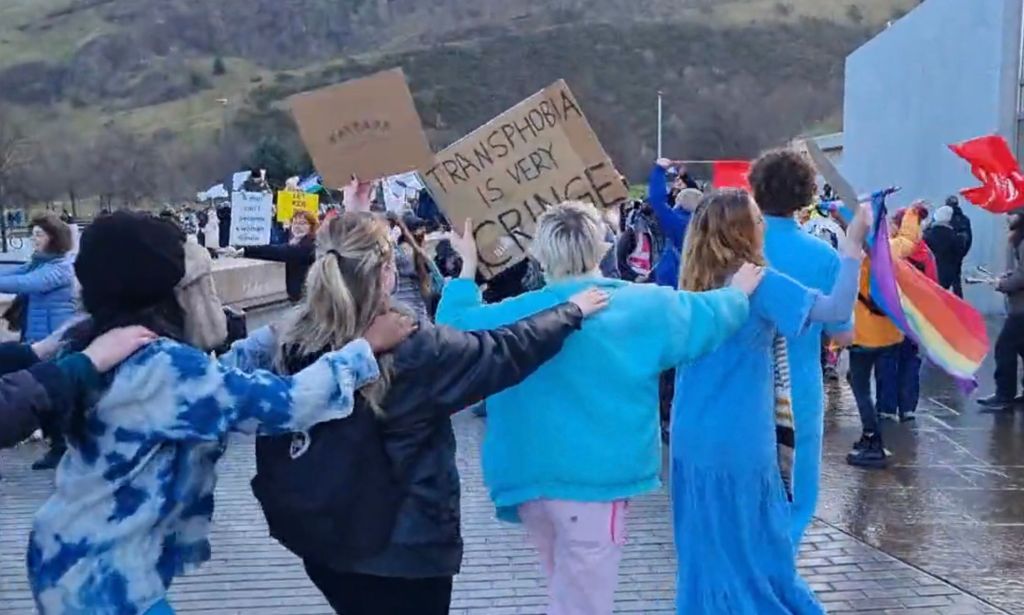